The Company has entered the event every year and enjoy the challenge to get out and be active. BikeWise is about levels of participation during BikeWise Week in March, and is not about extreme levels of exercise, although some participants do choose to do many kilometres during the challenge. 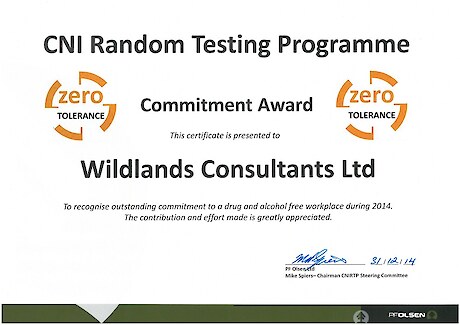 Wildlands has been recognised by PF Olsen as having outstanding commitment to a drug and alcohol free workplace during 2014.

Wildlands is assisting with implementation of the field component of Project Twin Streams for the Auckland Council (previously Waitakere City Council), (restoration of the margins of the Opanuku and Oratia Streams), and the overall project won a ‘Green Ribbon’ award in 2010.

SCA Hygiene Australasia, Kawerau, a company client, won a significant award in 2010 from the Sustainable Business Network, for a riparian project on the Tarawera River, which was planned and implemented by Wildlands.

Wildlands managed the streamside and riparian restoration of Olympic Park in Auckland, which won the “Outstanding Park Award for 2007” (awarded by the New Zealand Recreation Association).

This award was “presented in recognition of an outstanding contribution to sustainability.” The judges commented that: “Wildlands has demonstrated outstanding performance across all three sustainability dimensions and has undertaken sustainability initiatives in the areas most relevant to its economic, social and environmental performance. It is likely that Wildlands is an industry leader in New Zealand.”

In 2001 this project was recognised under the RAMSAR Convention with a national award from the Minister of Conservation for the development and application of best practice in the conservation and wise use of wetlands.

The project also won the Industry/Business/Council section in the Environment Bay of Plenty Environmental Awards in 2000.

Other Wildlands projects have also won awards from Environment Bay of Plenty: Ohinemataroa (Whakatane) River restoration and a plant nursery project at the Taneatua School.