The discipline of herpetology in New Zealand includes lizards, frogs, tuatara, sea turtles, sea snakes, and in rare instances involves the capture of stowaway snakes and turtles/tortoises from other parts of the world. New Zealand rivals temperate Australia in terms of lizard biodiversity, and our herpetofauna have many ancient traits that make them unique internationally; e.g. all New Zealand geckos give birth to live young (usually twins) every 1-2 years. 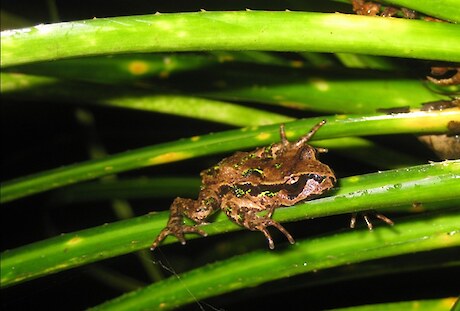 Archey’s frog, CoromandelNew Zealand lizards and frogs are threatened by habitat modification and destruction, predators, and in some cases poaching. Large-bodied lizards tend to be most threatened as they tend to be longer-lived, have fewer young, and require more specific habitat to avoid predation than smaller-bodied species. All New Zealand herpetofauna are assigned a threat ranking by the Department of Conservation every 3-4 years (most recently in 2015 and 2017 for lizards and frogs respectively). There are now 37 species of ‘Threatened’ lizards in New Zealand including eight ‘Nationally Critical’ species. There are 52 ‘At Risk’, seven ‘Data Deficient’, and 10 ‘Not Threatened’ species. Over 80% of Threatened and At Risk species have at least one record on private land, and some occur exclusively on private land. Of the frogs, two are ‘At Risk’ and one is ‘Nationally Vulnerable’.

Lizards must be considered in scoping reports and in AEEs in order to achieve an “adequate” assessment of environmental effects (as per Section 88, Schedule 4, clauses 6 and 7 of the Resource Management Act 1991).

All New Zealand lizards, frogs and tuatara and all vagrant and migrant species of sea snakes and sea turtles are absolutely protected under the Wildlife Act 1953, and consequently:

Wildlands have three full-time herpetology specialists along with several experienced and skilled lizard field ecologists. All team members have a proven track record in using up-to-date methodology to find rare and cryptic species. The Wildlands herpetological team have DOC Wildlife (handling) permits for public and private land along with a number of Scientific Reserves, which enables a quick response for lizard survey, lizard identification, and assessing habitat values and potential impacts.

Staff at Wildlands have a wide variety of expertise including location of and taxonomic description of newly discovered lizard species, assessment of the conservation status of threatened species, Ecological Impact Assessments (EIA), lizard salvage, mitigation and conservation translocations and population monitoring.

In biosecurity, we have expertise in biosecurity response and management of invasive herpetofauna. Our team also have international experience with exotic herpetofauna in the surveillance and monitoring of snakes, frogs, salamanders, tortoises and freshwater turtles.

Wildland Consultants actively support professional development and consequently we remain at the forefront of innovation in environmental planning and herpetological methodology and technology. Wildlands staff work closely with DOC’s national Lizard Technical Advisory Group and the Native Frog Recovery Group, and are members of the Society of Reptile and Amphibian Research in New Zealand (SRARNZ), the New Zealand Biosecurity Institute (NZBI) and the Herpetological Society of New Zealand (HSNZ).