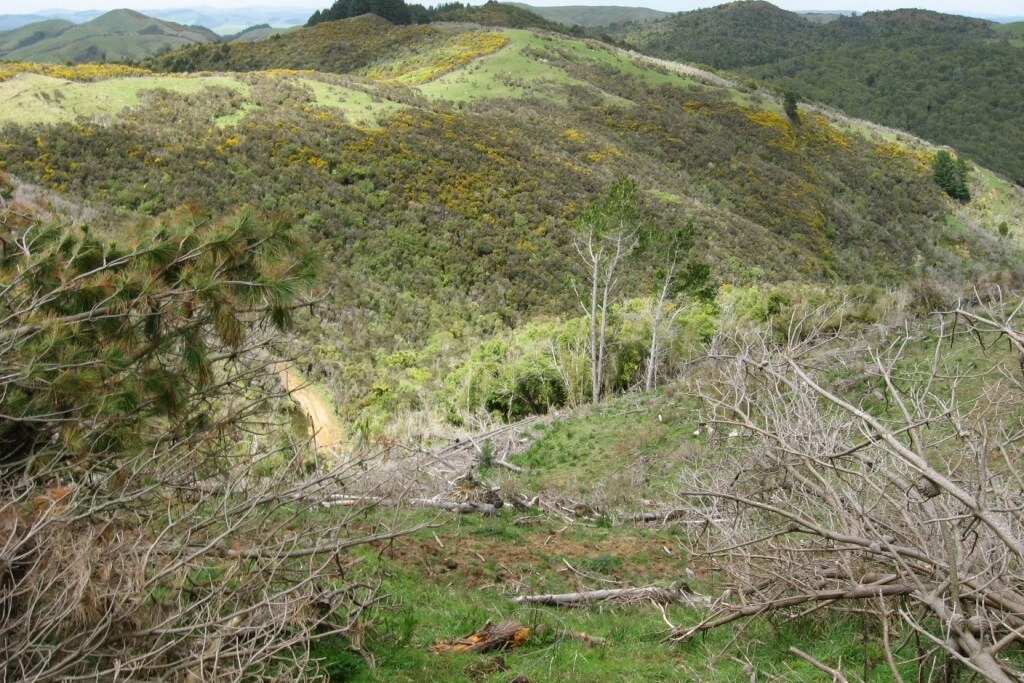 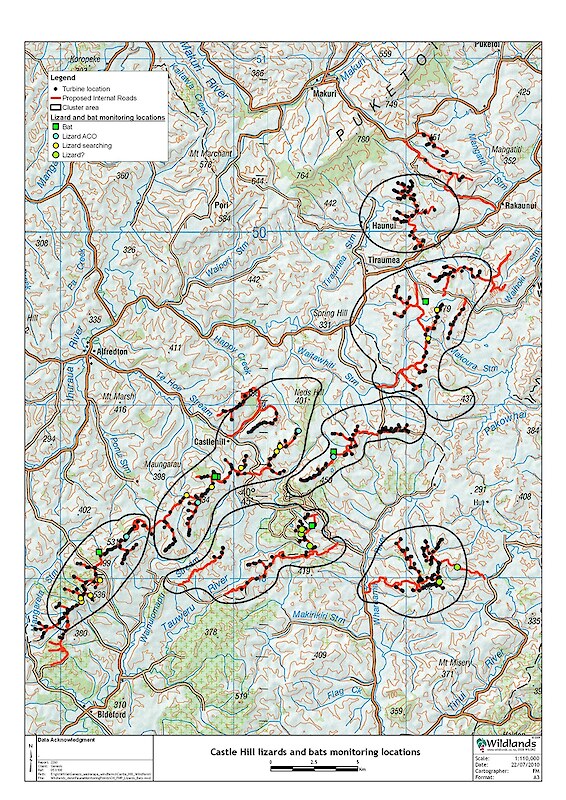 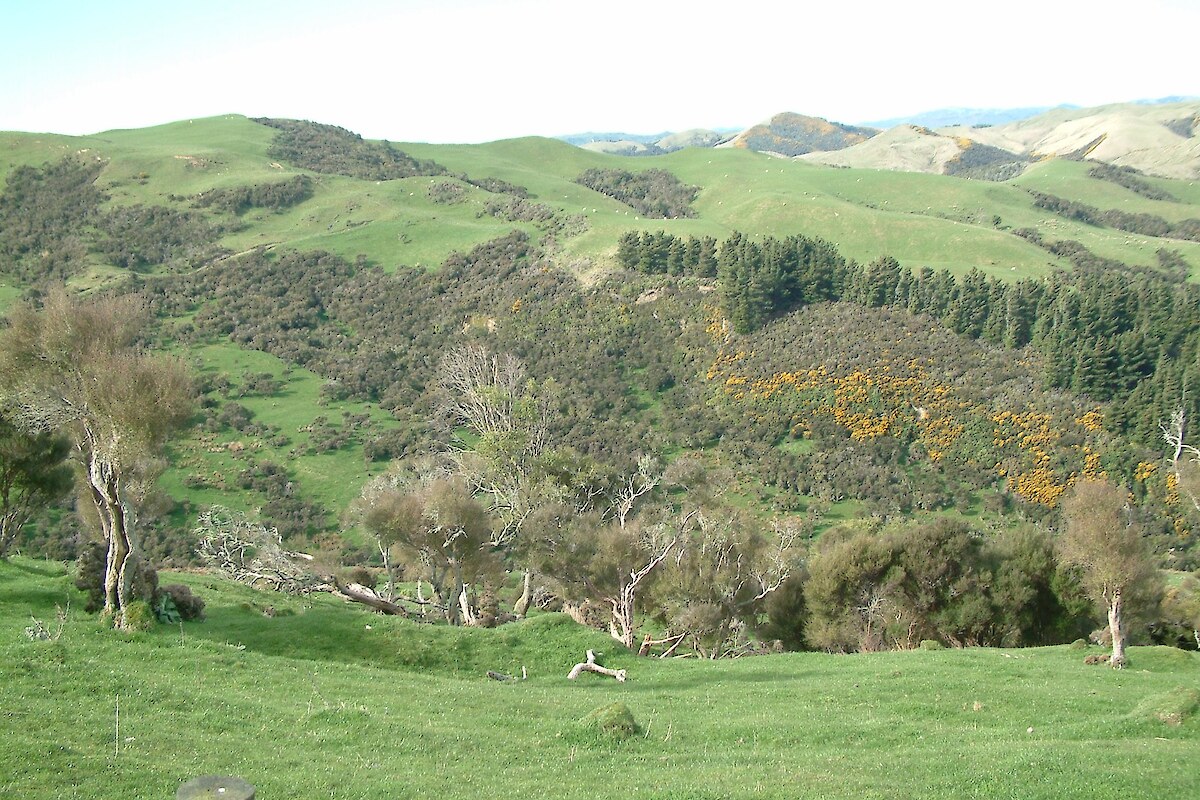 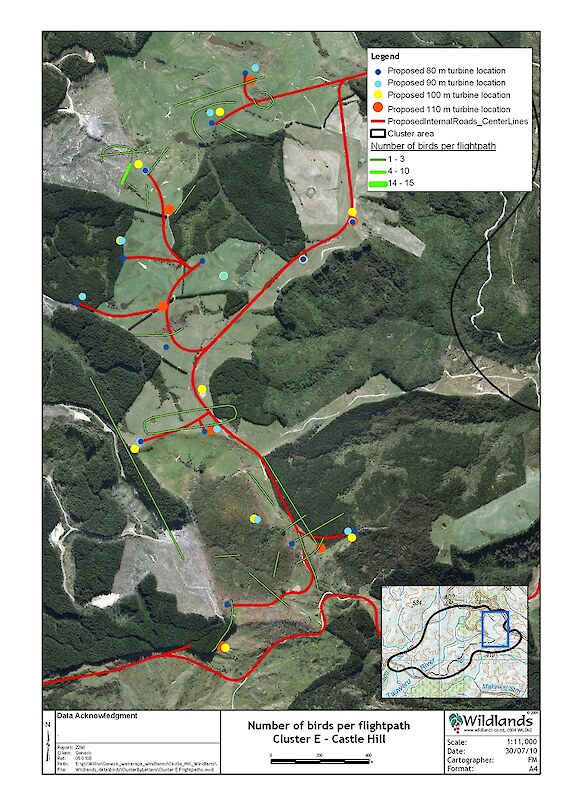 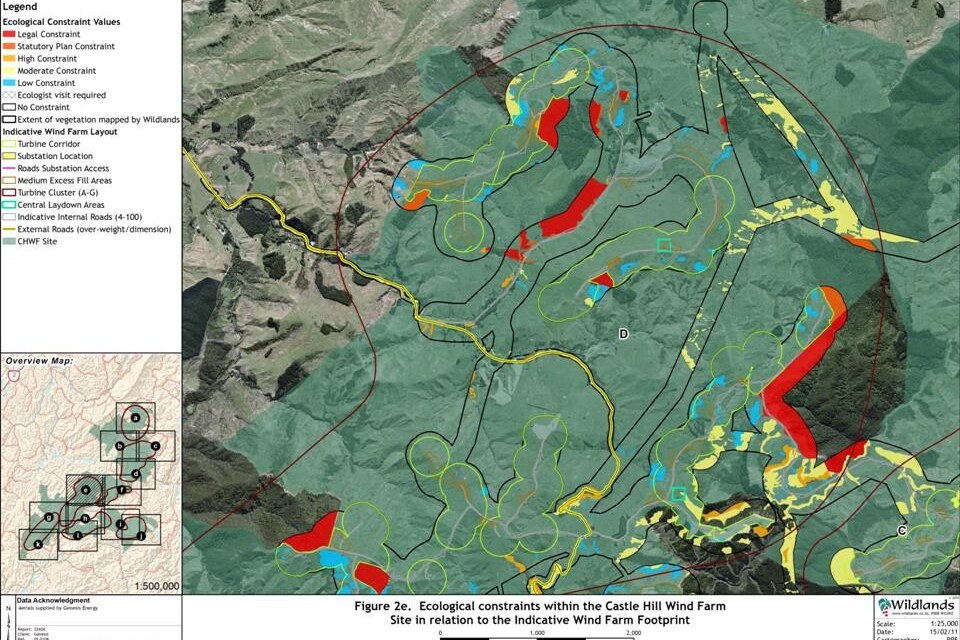 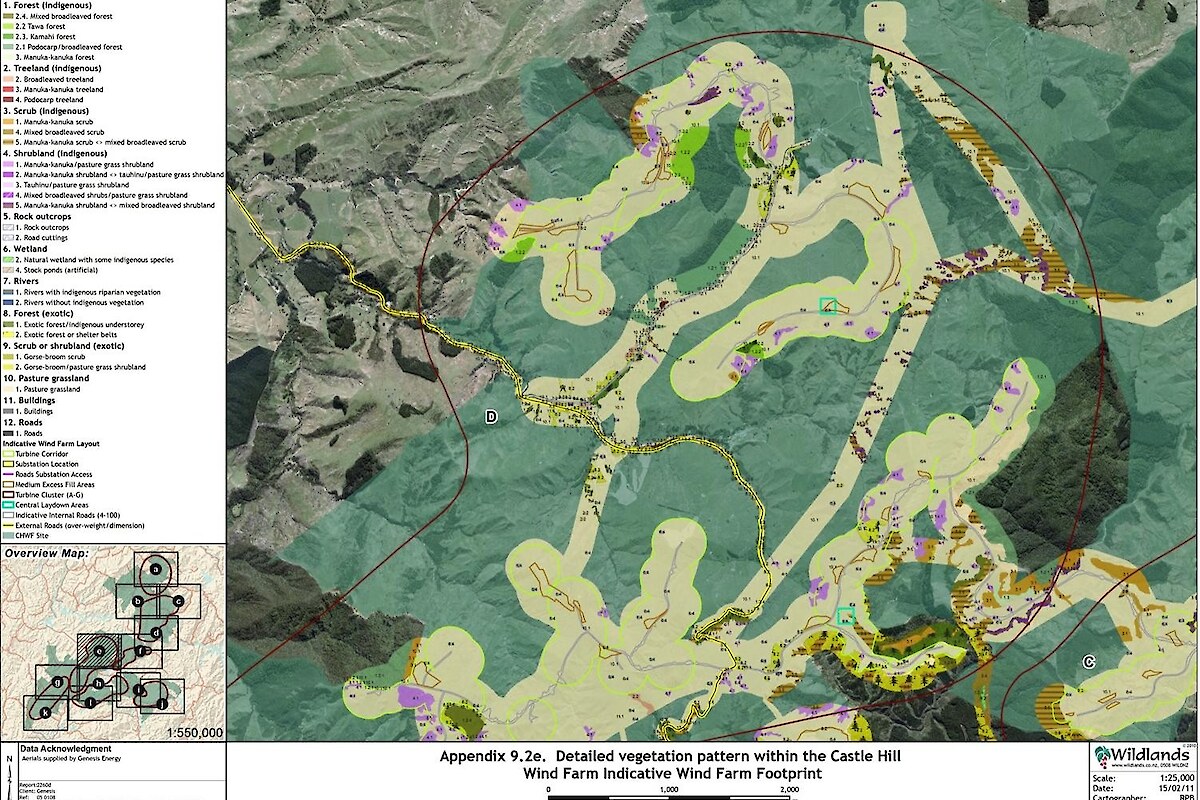 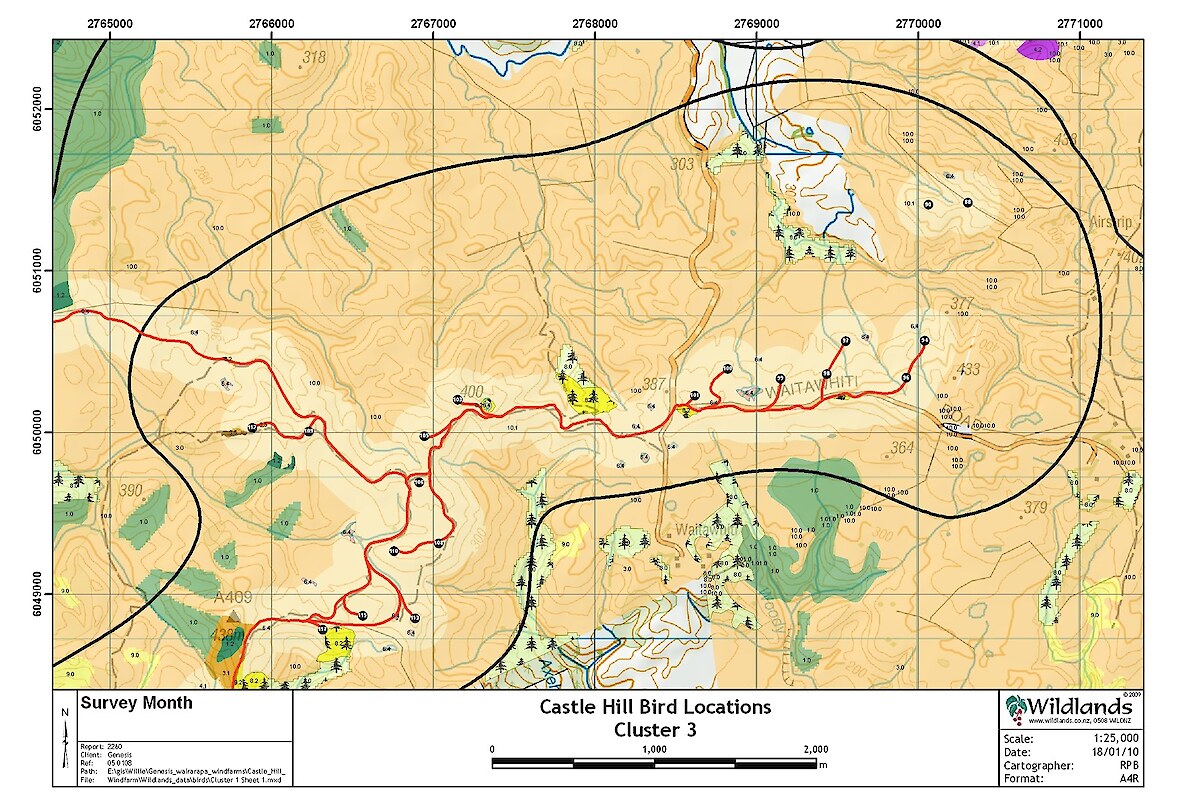 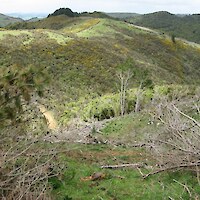 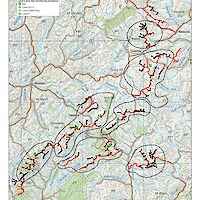 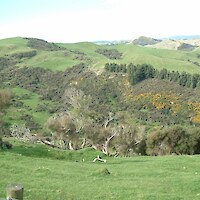 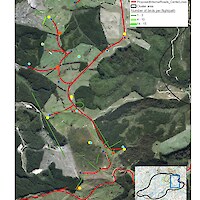 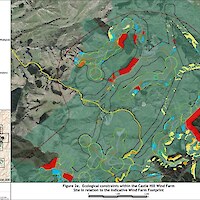 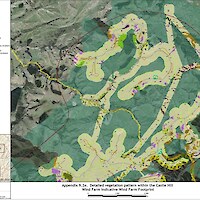 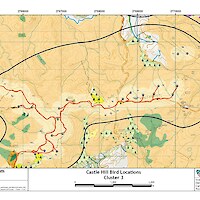 Wildland Consultants Ltd was commissioned to undertake a baseline terrestrial ecological assessment and assess potential ecological effects arising from the development in order to inform the resource consent applications for the wind farm.

Twenty-nine vegetation and habitat types, including indigenous forest, treeland, scrub, and shrubland, rock outcrops, wetlands, rivers, exotic, forest, scrub, and shrubland, pasture, buildings, and roads, were mapped. Each vegetation type was assessed to determine its relative ecological value. No Threatened, At Risk, or regionally uncommon plant species were recorded within areas that would be affected by the development.

Potential construction effects include the loss of habitat for birds, bats, lizards, and invertebrates through vegetation clearance, and the introduction of weed species. The creation of internal roads could also result in easier access for domestic stock into existing indigenous vegetation, and the roading network could increase movement of pest animals through the site.

Potential adverse effects on existing ecological values have been minimised by avoiding, as much as possible, high value areas of indigenous vegetation. These include areas with formal legal protection and vegetation types that could trigger provisions in the Horizons One Plan and/or District Plans. As a result, most of the potential vegetation clearance (93%) comprises low value vegetation and habitats (largely pasture). Appropriate controls on earthworks and other construction activities will also minimise adverse effects.

Once construction works are completed, areas disturbed by earthworks will be recontoured and revegetated with suitable species, including using locally-sourced indigenous species to rehabilitate existing areas of indigenous habitat.

Potential operational effects include collision with turbine blades by birds and long-tailed bats. Indigenous birds recorded at the site that are predicted to be at risk of collision include Australasian harrier, southern black-backed gull, and three species of shag. Kereru, tui, and paradise shelduck may also be at risk.

A comprehensive suite of mitigation measures has been proposed for unavoidable adverse effects, all of which can be fully mitigated. There are areas of indigenous vegetation and habitats worthy of protection and enhancement within the site. It is also proposed to undertake monitoring of vegetation condition, revegetation sites, avifauna and bat turbine strike, bat roost sites, and pest animal abundance.

Revegetation, vegetation and habitat, weed, pest animal, and fauna management and monitoring plans will outline the approach to providing mitigation and reporting (including involvement of relevant agencies).

After taking into account all of the potential ecological effects, it was found that the Castle Hill Wind Farm site was an appropriate location for the construction and operation of a wind farm. If the proposed avoidance, management and recommended mitigation measures are implemented, the project will not result in a loss of biodiversity values, and has the potential to result in a net gain of indigenous biodiversity values in the northern Wairarapa. Genesis Energy was granted a resource consent by the Environment Court in July 2013.