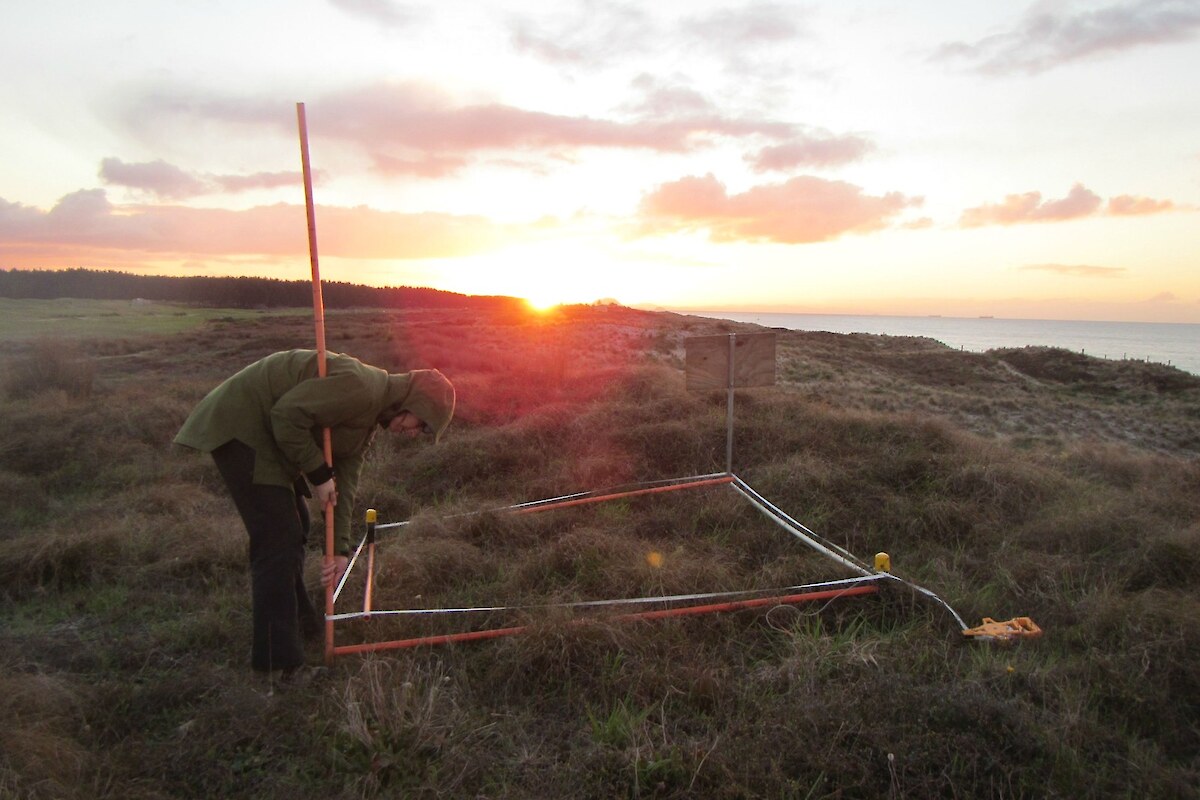 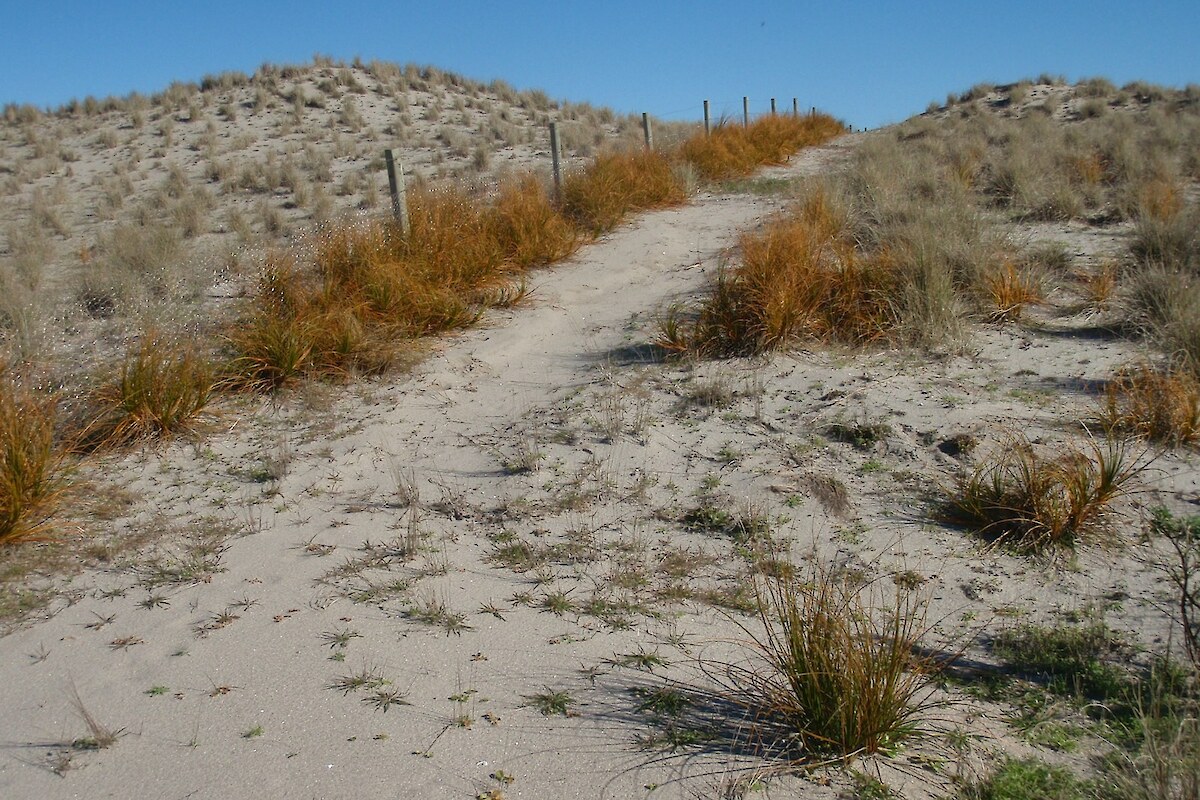 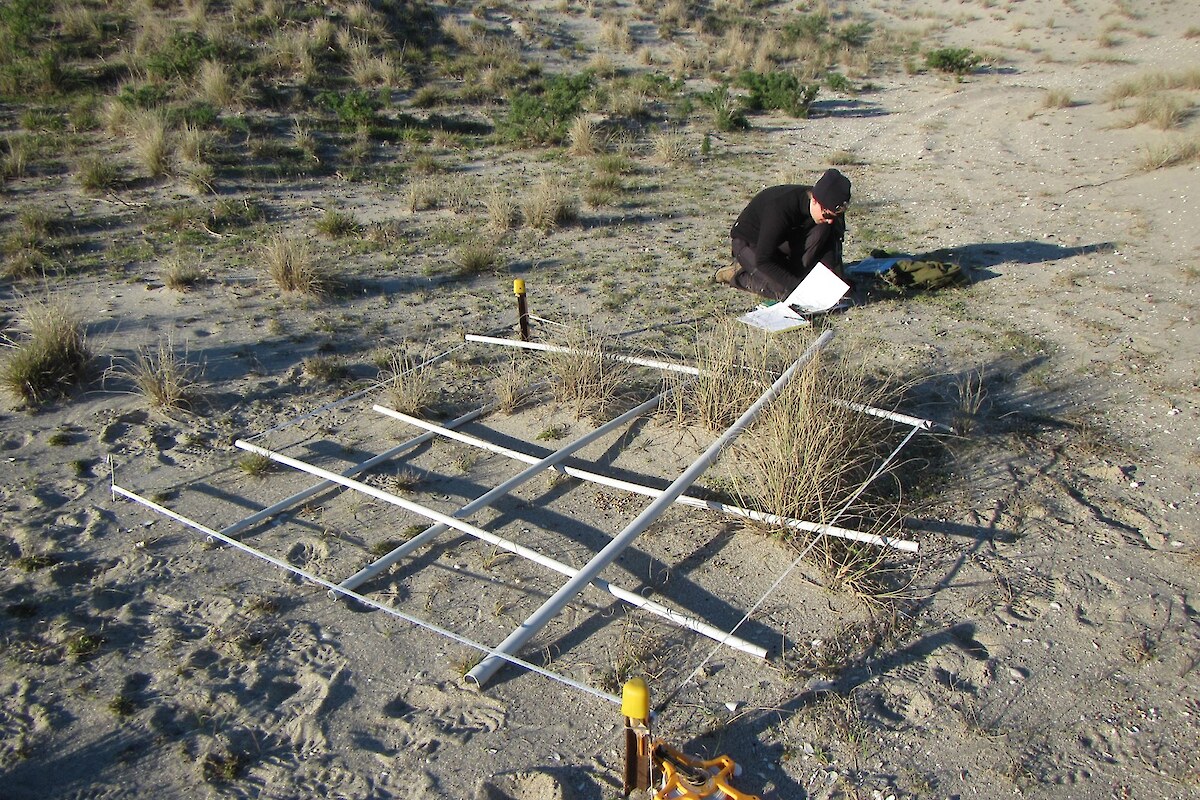 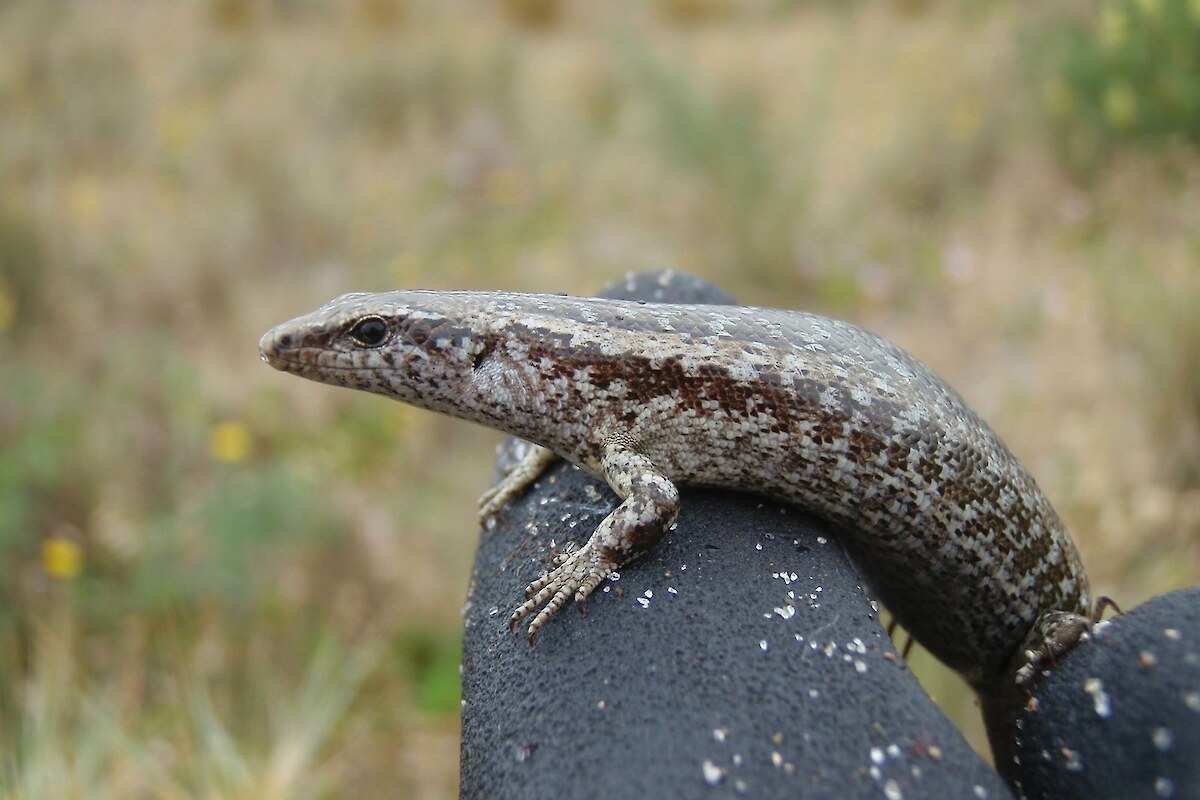 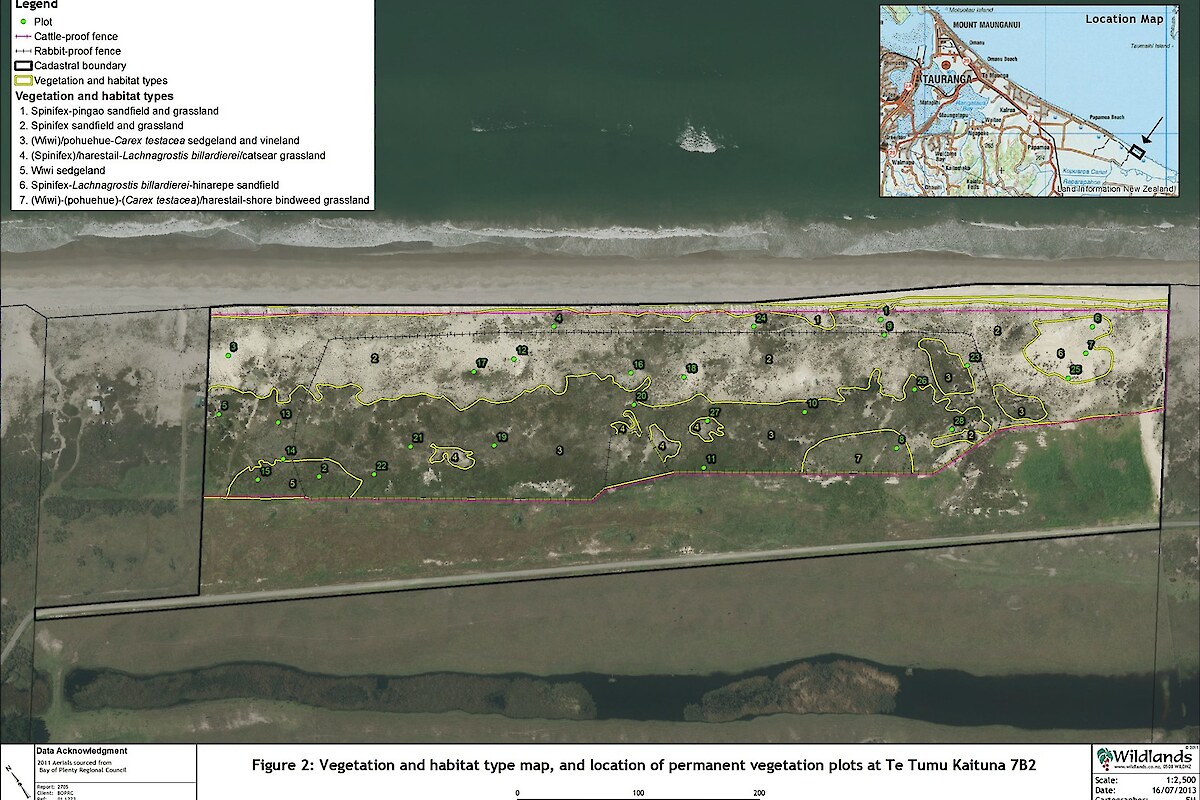 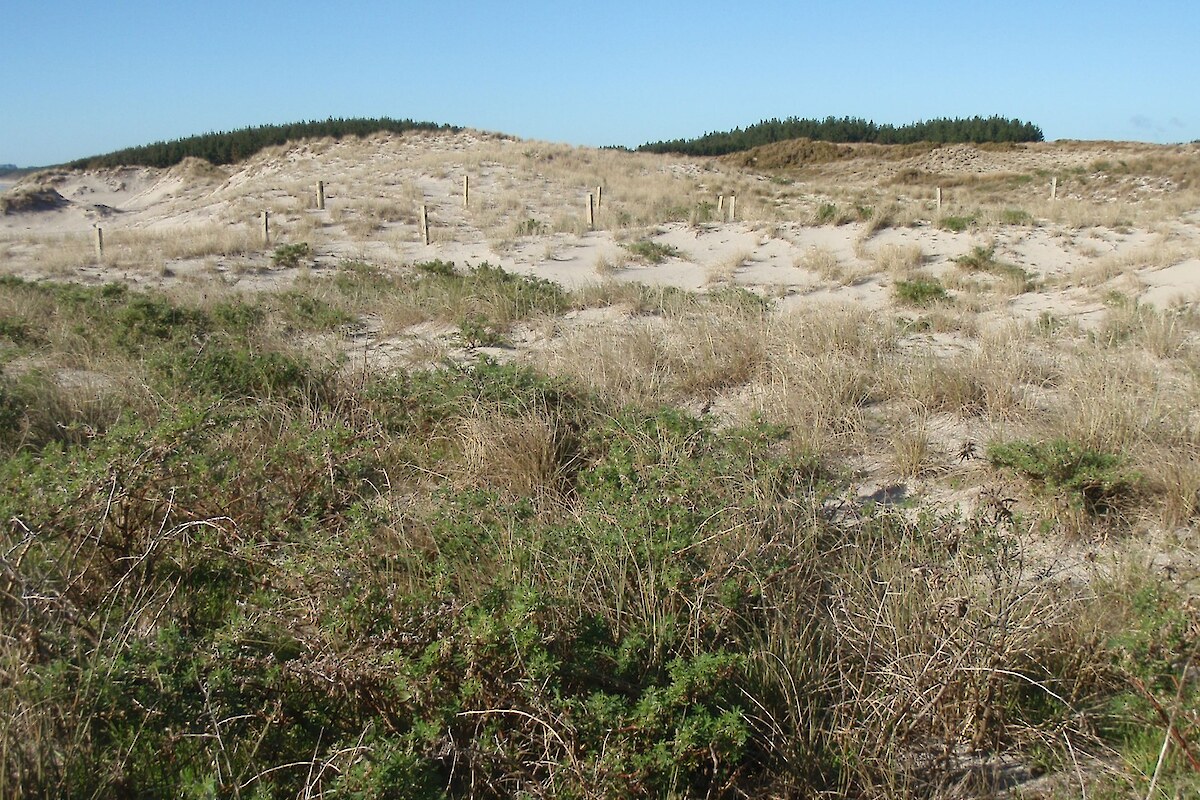 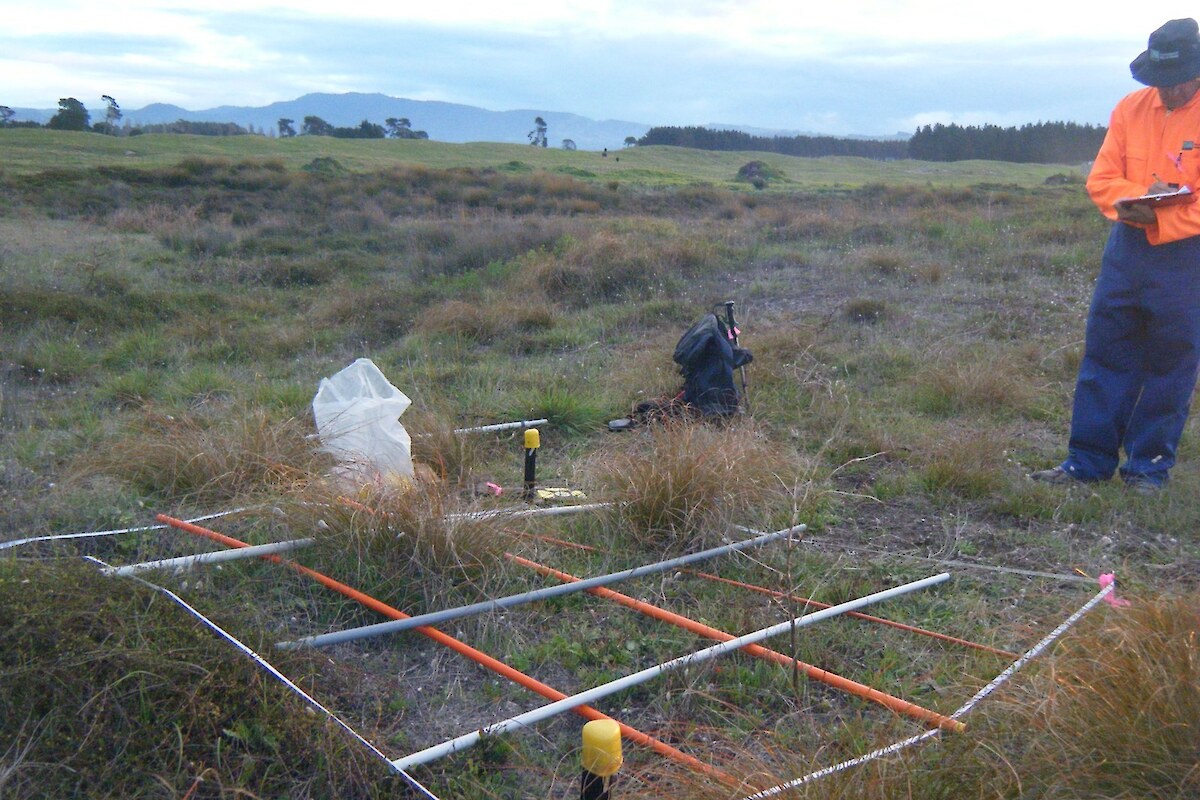 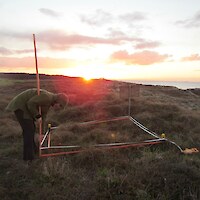 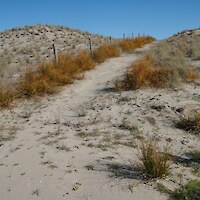 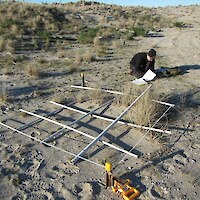 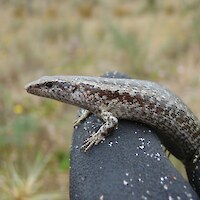 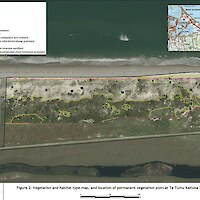 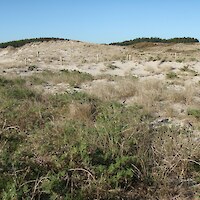 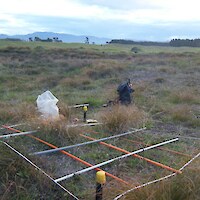 Coastal sand dunes east of Papamoa are being protected and restored thanks to Trustees and owners of Te Tumu Kaituna 7B2, Bay of Plenty Regional Council, and Nga Whenua Rahui. The site is within a Category 1 ‘Special Ecological Site’ in the Tauranga City Plan.

In order to restore biodiversity and protect cultural and archaeological heritage, the site has been fenced to exclude cattle and a rabbit-proof fence built around part of the site (approximately 7 ha). Rabbits have been eradicated from inside the fence.

Wildland Consultants Ltd has been helping with this project since 2011, when we were engaged to prepare a plan for monitoring changes in the ecological condition of the site and implement monitoring before the eradication of rabbits.

We undertook a field survey of the site to map and describe the vegetation and habitats; establish permanent vegetation plots inside and outside the rabbit-proof fence in which we measured plant species cover, ground cover, maximum heights of spinifex (Spinifex sericeus), pingao (Ficinia spiralis), hinarepe (Poa billardierei), and woody weed species, number of plants of spinifex, hinarepe and pingao, presence of inflorescences on hinarepe, pingao, and spinifex, number of rabbit pellets, and signs of browse on indigenous species; established photopoints; recorded locations, numbers of individuals, numbers of patches, and numbers of ‘groups’ of pingao and hinarepe; undertook five-minute bird counts at each plot; and used Artificial Cover Objects to monitor for katipo spider and lizards.

Rabbits were eradicated from inside the fence by October 2011, and rabbit control was also undertaken outside the fence.

In 2013, Wildlands re-monitored the site using the methods established in 2011.

The dune vegetation is dominated by spinifex and pingao on the front face of the foredune, with pohuehue (Muehlenbeckia australis), wiwi (Ficinia nodosa) and Carex testacea occurring inland on stabilised dunes.

Twenty-four vegetation and habitat types were identified at the site, of which six occurred within the rabbit-proof fence. Twenty indigenous vascular plant species were recorded, including five species which had been planted at the site. Two nationally At Risk species are present: pingao (At Risk-Relict) and hinarepe (At Risk-Declining). Three species - Zoysia pauciflora, Oxalis rubens, and Senecio biserratus - are regarded as regionally uncommon.

The cover of several vascular indigenous plant species changed between 2011 and 2013 as a result of planting undertaken at the site and potentially as a result of fence construction. Where changes in cover inside the rabbit-proof fence were mirrored by equivalent changes in cover outside the fence, environmental causes that were independent of the fences are suggested, such as the removal of domestic stock from the entire site and rabbit control operations outside the fence reducing rabbit numbers to low levels.

Sixty-one exotic vascular plant species were recorded at the site, and it appears that lupin, pampas, gorse, and blackberry have spread within the site since the removal of cattle and construction of the rabbit-proof fence.

Seventeen bird species (eight indigenous and nine exotic) were recorded, including Caspian tern (Hydroprogne caspia; Threatened-Nationally Vulnerable) and variable oystercatcher (Haematopus unicolor; At Risk-Recovering). Shore skink (Oligosoma smithii; Not Threatened) was recorded both inside and outside the rabbit-proof fence. In 2013, katipo (Latrodectus katipo; At Risk-Declining) were detected outside the rabbit-proof fence under Artificial Cover Objects and driftwood.